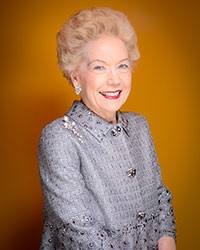 Fellow of the Australian Institute of Company Directors (FAICD)

Susan (Sue) Marie Alberti is the co-founder and Managing Director of the DANSU Group and Chairman of the Susan Alberti Medical Research Foundation. Susan Alberti AC is one of Australia’s pre-eminent philanthropists, having raised in excess of $200 million for medical research and other charitable causes over her successful business career.

Most of these were design and construct projects undertaken on behalf of a significant number of Australian and international companies. Each project was different, with unique combinations of space, facilities and staff amenities. DANSU Group has been acknowledged as one of Melbourne’s most capable commercial and industrial builders. Susan’s business success allowed her to devote more time to her private passion for philanthropy.

The Susan and Angelo Alberti Diabetes Discovery Wing has been established at the International Diabetes Institute of Monash University in Caulfield to undertake epidemiological diagnosis and research. The Susan Alberti Complications Unit at the Walter and Eliza Hall Institute in Parkville was opened in March 2000.

Her community contributions extend far beyond diabetes research and support.

In 1997 she received her AM (Member of the Order of Australia) for her contribution towards the cause of diabetes research.

Susan was awarded her AO (Officer of the Order of Australia) on Australia Day in 2007. This was in recognition of her long and outstanding contribution to major medical research institutions, particularly as a philanthropist, fundraiser and advocate for type 1 diabetes care and research.

In 2013 Sue resigned from her positions with the Juvenile Diabetes Research Foundation after devoting nearly 32 years of her life to JDRF in Australia and internationally and rose to the position of National President in Australia. She was also a member of the International Board of Directors for nine years, International Board of Chancellors and International Patron for JDRF. Susan was awarded the JDRF International Volunteer of the Year 2003, this is the first time this honour has been bestowed on an individual outside of the United States in its 45 year history.

On Australia Day 2016, Susan was awarded the Companion of the Order of Australia (AC) Award in recognition of her eminent service to the community, particularly through philanthropic and fundraising support for a range of medical research, education and to young women as a role model and mentor.

Susan Alberti’s story is an inspiration to many. She is regularly invited to speak about her career and passion for medical research, football and making a difference.

She is married to Colin North OAM.