Tradeswomen Australia Community Foundation have introduced their ‘Building Futures: Pathways to Trades’ program to schools, aimed at providing female secondary students with information on how to access well-paid employment in the trades. 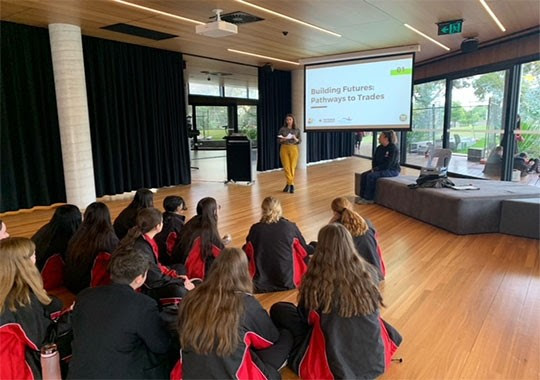 Fiona McDonald, Managing Director of Tradeswomen Australia said participation of women as apprentices/trainees in the non-traditional trades, especially the core trades of construction, automotive and electrical, has remained at less than 2%, and has changed little over the last 25 years.

Ms McDonald said “women in Australia are being isolated from lucrative trades jobs through historic gender discrimination barriers, a lack of promotion of trades at school level, and in some cases, a lack of knowledge by parents.

“The Tradeswomen Australia Community Foundation Schools Program is being managed by Ms Katie Yates, a highly experienced manager of major social and economic inclusion campaigns, who is working with career teachers to implement the student trades Information program into secondary schools.“

Ms Yates said the starting point to increase the number of women in the trades in the future will rely on information and a community awareness strategy to alert girls at secondary schools of the opportunities to undertake a successful well paid and rewarding career in the trades.

“The Tradeswomen Australia Community Foundation Schools Program is not only based on providing information, with students meeting tradeswomen who provide an insight into their personal journey of becoming a tradeswoman. The program also focuses on making the decision to accept an apprenticeship, the challenges, and rewards of work in the trades, plus longer-term plans, and opportunities, including starting their own businesses.

“The schools program provides an opportunity for female students to consider employment in the trades to boost their financial security, and importantly also provides information to discuss with parents,” Ms Yates said.

What Tradies are Paid

The 2020 Service Seeking’s report yearly incomes for tradies were: