TWA were privileged to interview Kara recently, an award-winning Electrotechnology Specialist in the Steel Industry within NSW. Kara is passionate about being the best in her field, putting in the hard work and producing incredible results. She is also committed to being the best role model and advocate for female tradies as she can be. Here is her story:

Thanks for joining us and getting your story out. It really helps to get the word out, encourage more women into trades, as well as relating shared experiences with other tradeswomen.

I like spreading the word, we need more females! They’re all blokes I work with, there’s only one other female tradie in our company, and the only other women I get to interact with are the cleaners twice a week. There were a couple of females who walked around site as part of the apprentice jobs last year, and I asked “oh, so are you going to hire those girls or what?” (laughter) – anyway, they didn’t end up hiring them – I was like “oh, come on!”. The guys I work with are really great though, I’m really lucky.

Career Change into the Male Dominated Field of Electrical

When it came time to choose a career at school, I felt like I was pushed into University based on the subjects I studied. I didn’t know what I wanted to do, so my career advisor advised me that I should go to Uni and pick areas that I liked. I was always into sport, the human body and physical education at school, so I chose exercise and sports science focusing on training athletes. But as I went through my degree, I realised that it was something that I didn’t really want to do, so I took the other path with was Exercise Physiology. You don’t do work experience until the end of your degree, and I thought I may as well finish it, but I have to say I never really enjoyed it much. When I graduated it was also difficult to find work.

I never considered a trade until I took the time to sit down to think about what I really wanted to do. Trades weren’t really mentioned when I was at school – the subjects I chose were the sciences and physical education, not woodworking or metalwork related to trades. When it came time to looking at careers, trades weren’t suggested and weren’t something I really thought about.

The pathway of becoming an electrician came thanks to my partner, who is a Fitter and works in the mines. He always said I should have been an electrician – I said “yeah – I probably should be, it would be a better job!”. But then I really thought about it seriously – “why not be an electrician?” – it really married up with a lot of my interests, plus I was looking for a new job. So I went into a pre-apprenticeship, and the rest is history!

When I was young, I spent a lot of time with my grandparents during school holidays. My grandad was a mechanic, and in his spare time he was a woodworker. So he used to be in the shed building furniture, and I would go in and have a look in his wood scrap bucket, pick stuff out of it and build things with them. I also used to help him weld, ask him for the hammer and some nails to nail something in place, glue things together, and tinker with things when I was in the shed. That started the spark, then my partner and I renovated our house, so I got more of an in-depth experience in building and trade skills. 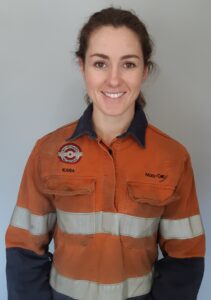 I really liked trade school – most of the people I went to class with were boys, who were much younger than me and didn’t take it seriously. That was kind of frustrating. My TAFE teachers were really good and asked me whether I’d applied for trade jobs – they ended up calling my employer and recommended me for my job that I have now, so that was really handy. There were a couple of girls in my TAFE class for Certificate III, which was nice.

When I look back at where I started as a pre-apprentice, to what my skills are now, I can see that I’ve grown so much and on par with the other guys I work with now. Now I’m given a job, and I can work through it without any help. I use drills, weld, have all of these skills that I didn’t have before. Making something out of nothing is really satisfying.

Tell me more about where you work, and what a typical day looks like for you.

I work for a steel plant in Newcastle, as an Industrial Electrician. I’m working on heavy machinery where we produce steel products for heavy industry. My team and I respond to break downs, work out what’s wrong with the machine then fix it. We also do new installations – equipment, components and changes to equipment, preventative maintenance and inspections. Basically, we need to keep the plant running as well and efficiently as possible.

I’d really like to stay where I am until I’m absolutely comfortable with what I do, continue to build my skills and experience, then progress into an engineering/technical position.

The company I work for, and the guys I work with, are really lovely. I suppose the only real issue I encounter is that sometimes you’re put into a “bucket” of what I can and can’t do, and it puts a limit on my abilities because I’m a female, which is really annoying. For example, when I was an apprentice I was rotated between four different departments, so that meant every nine months I had to be in a new crew. This was challenging because it meant I had to prove myself all over again and was at times intimidating. There were a few occasions where I would not be given any work and instead when I asked “well what do you want me to do?”, they’d say “oh… just go and help the other apprentice” like I was a bit of an afterthought.

Sometimes when jobs came up that I really wanted to be involved in, my tradesperson would be told  “oh…get someone else to help you with that.  I could tell they were thinking “she wouldn’t be able to do it”. So, without giving me a go first, I would be assigned as a ‘safety watcher’ instead. I show them what I can do, and over time they warm up to me. It depends on who you’re working with too – the team I’m working with at the moment don’t put limits on my abilities.

Being a Role Model 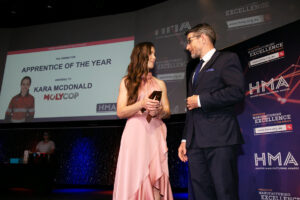 A lot of guys I’ve worked with have never worked with a woman before, so I guess they didn’t know what to expect. So everything I do at work, I have in the back of my mind that I need to set a positive example so they’re more open to having more females in their workforce and see it as a good thing.

Sometimes I do feel that there is a bit of pressure as a female in this industry. I just started a shift role where I respond to breakdowns and I’m the only electrician that’s there – all of the other guys in that role are pretty experienced, and they know how to fix most things. There’s quite a bit of pressure from operations to get things up and running as soon as possible, and at this point I take a bit longer to get some plant up and running. Because they know I’ve been Apprentice of the Year in 2018 and Hunter Manufacturing Apprentice of the Year in 2019, there’s that expectation that “hangon, you should be able to fix this, do the best job every time”. It’s OK because I try and do my best every time anyway – I don’t know whether people expect more from me because of this, and that the pressure comes from myself as well. I also feel the pressure myself because I want to set a good example. I balance this out with the comments I keep receiving, that I’m doing a really good job and surpassing expectations.

My biggest piece of advice would be “Be Yourself”. Be yourself, work hard and try and be the best you can be every day – that will earn you respect. It’s really important in the workplace to earn respect – you’re accepted and treated well. There have previously been female apprentices in my workplace who didn’t see it that way, and people ended up getting really frustrated with them, because they tried to fit in too much or would complain about jobs because it was too dirty or too hard. Don’t whinge, show you really want to be there, and understand that you always have to start somewhere and sometimes have to do crappy jobs!

If I felt that I had skills I needed to develop, I would ask for help and particular projects so I could work on them. In each department pick out the people that you want to seek advice from, as well as other mentors – I found my career advisor was great.

Think about your strengths and weaknesses, and what you want from a career. Go after what you want, chase your dreams – don’t feed into your fears about your gender or how you think people will respond to you or treat you, or that you’re not good enough.

Outside of the Workplace

I love riding my motorbike! I started riding dirtbikes, but I don’t have anywhere to ride them, so I ride my roadbike on weekends. I also like going to the gym, playing with my dog and camping. I also have the new house, and have a lot of landscaping to do, so I spend a lot of time in my garden.

We thank Kara not only for her time, but her continued focus and efforts on specialising in her field, as well as her commitment to encouraging more women into trades.