A qualified electrician specialising in solar, business owner, group training officer and mother of three, Kathryn is a powerhouse and passionate advocate for guiding the next generation of young women in considering the electrical trade as their future career. Based in Western Australia, Kathryn works for Electrical Group Training, dedicated to providing female electrical apprentices the best support and advice throughout their apprenticeships. TWA thank Kathryn for putting aside her valuable (and limited) time to chat with us about her electrical career.

The Choice to Undertake Electrotechnology

I wanted to be a sparky since the age of about 13, 14. I remember I was really interested in how and why it works, the job in general. There’s nothing I can pinpoint exactly – I was just intrigued by the trade. I wanted to help out when my folks built their second home, and found the whole process really interesting.

I didn’t really take to commercial work and going to the same place every day. I’m very eager to see the end result, and not particularly patient that way! I was really fortunate in my work – I got to move around a lot, all facets of the work were interesting, I learnt a lot, and I was able to get involved in group training from there because of my background. What I really like about the trade is the completion of the job, seeing the end results – you’ve physically made something, made something work.

I was the only female in my class, and there was only one other female I met in my entire trade school experience. When I started at my current group training company we had about four female apprentices – we’re now up to 19. Throughout my apprenticeship, there were no other females, perhaps one or two through my apprenticeship. There were a couple of hostile males in my experience, but a lot of very supportive men too. My trainers were also fantastic too. 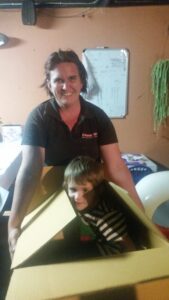 Issues and Barriers in the Industry

I remember in 2004 I had to take maternity leave as a second year apprentice – very very new concept to a male dominated industry back then, and viewed as a spanner in the works. My employer handled it as best as they could 16 years ago – thankfully the union were able to help in this area and assist in suspending my apprenticeship agreement. It took a long time to get that organised, because maternity leave was such a new thing.

I do get employers asking me “but what if they take maternity leave?”. I ask them “but what if your male apprentices decide to take off for six months on a Contiki tour and suspend their agreement? What if he breaks his leg when he does Motocross on the weekend?”. There are so many “what ifs” out there, maternity leave doesn’t make a difference, because male apprentices take off time for so many other things. The good thing nowadays that it is much more common, entitlements are written into contracts, so employers are considering it much more now.

Being Her Own Boss

My husband already had set up his own data and networking company, and hired the mob that I was working for to get the electrical side of the jobs he had done. I sat the test in April, was qualified in July and by September we had so much work on! I started advertising for general domestic work from there. It really suited us because, at the time I was working for someone else I needed to travel for 45 minutes to an hour to start at 6am. There are no daycare centres open before 7am, so my husband and I tried to coordinate it as best as we could. Then my oldest was going to start kindy – it was easier for me to be able to drop them off there and work around the hours that suited me than try and explain to a boss that I want to start later because I have kids. It wasn’t daunting for me – I was well into being qualified, and if it didn’t work out, I’d find a job. It was less daunting because of the industry boom then.

I was fortunate when it came to the demanding side of the job (the paperwork) – my husband ran that side of things. Normally you have the husband wife teams whereby the wife does all the paperwork, but no, it was the reverse in this situation. I did all the quotes, and my husband did all the accounts, etc. Eventually he moved into running the sales and admin side of the company full time when we moved into solar and got quite large, he was so supportive. 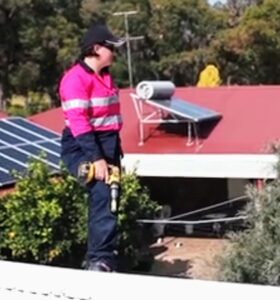 It was pretty much something that eventuated from circumstance! Back in 2008 it was cheaper to get your qualification to install solar than to get another company to do it, so I did it for myself and my family, focused the business side of things on solar, marketed solar through home shows and ads. We sold 70 plus systems on the day that the Government announced they were pulling the $8K grant, so we ended up having two businesses with one dealing primarily with solar. It was a great time to start up the solar business, as my husband’s work was dying down quite a bit around 2008-9, as electricians were also getting their data license as well by then.

My company was bought out around 2017, and I ended up working for employers again. It was a really testing, heartbreaking period – the people who bought out the business were a big corporate company and not used to dealing with a family business, so conditions change for everyone and they decided to leave. I moved on to other employment in 2018. I also had a miscarriage around this time too, and took eight weeks out to recover. Starting up another job, I also had to deal with an employer who didn’t want to do things by the book – it was a situation with money versus regulations – this was the first time I ever quit a job! 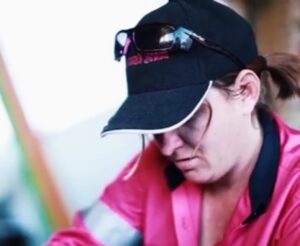 Inspiring the Next Generation of Female Electricians

When I’m asked about the electrical trade by young women, I tell them it’s an amazing job. It’s flexible, there are endless opportunities, there is a chance to run your own business if you want to. With an apprenticeship, it’s so beneficial, as you get paid to learn. And with electrical, there are so many avenues you can take once you’ve completed your apprenticeship. You can end up as a site supervisor, project manager – so many doors open with an electrical license. And these young women have the opportunity to do something that they like – working with their hands, working in a trade. When I talk to them, they’re perhaps considering something like hairdressing – but I can tell they’re not interested, they might be taking it up because they don’t want an office job. Giving them that suggestion triggers something in them that they haven’t thought about, or someone else hasn’t suggested to them. Not that someone is going to suggest that they can’t take it up – back when I started I was told “oh you’re going through a phase, you’re trying to meet boys, you’ll change your mind”, all these reasons why I shouldn’t at school. My family were the only ones that told me I could, and supported me. I want to make a change and encourage more women into the trade. We’re currently forming a committee here in WA to encourage more women into the electrical trade.

If you think you might like it, if it’s on your mind, give it a go. There is no reason you can’t try it out. That applies to mature age women as well. You have to be strong-willed to enter the trade at a young age, because there’s so many times and influencers that can deter you, so that’s why we have quite a few mature aged female apprentices because they were convinced to go down different paths during school. But there are barriers for them – there is the money factor – employers are not keen on paying mature aged apprentices more for the same level of skill. Hopefully sometime in the future in WA we will be able to fund the gap between a young and mature age apprentice.

Kathryn Outside of Work

I’m a mother of three – a sixteen year old, a seven year old, and I had another one last year too. So have my hands full!

Kathryn’s transparency in sharing her experiences, her work in encouraging women to the electrical trade as well as juggling three children with her full time job is truly inspiring. If you want information on how to become an electrical apprentice, group training or any other areas that sparked your interest in this interview, get in touch with us – info@twaus.com.au.