Jo left Canberra at 19 determined to be a rockstar and 5 years later found herself an A grade electrician. Using her trade to travel the globe, Jo returned to Australia to work as a hazardous area operator in very tough conditions. Jo’s career pivoted to teaching electrical trades at NECA, then opening her own business “Elechick” while raising three primary aged children. Jo is a true trailblazer, recently retraining as the first female tunnel boring machine operator in Australia. Our Liaison Officer, Erica, was fortunate enough to interview Jo as part of our “Trailblazing Tradeswomen” event – here’s her story

Before taking up an electrical apprenticeship…

Jo worked as a waitress at a theatre, which didn’t pay much. Once the Government offered low-income earners $300 to upskill in a trade, Jo’s survival instincts kicked in and took the opportunity. She confesses she didn’t take the trade courses seriously a the start, dipped her toes into a few opportunities, but didn’t settle on anything. Her trainers finally called her in and asked her what trade she wanted to take up. “I want to become a sparky” replied Jo, not giving it too much thought. “I was being a smart a**” she laughs, “they organised an aptitude test, and I didn’t even know the names of the tools”. In spite of this, Jo had a natural talent that led to an electrical apprenticeship.

Jo’s light-bulb moment happened when she helped a friend fit a stereo in her car. They worked on her car at his sharehouse, where one of her friend’s housemates worked as an electrical apprentice. “He had a work van, fitted with compartments and drawers – I thought it would be cool to drive around in a van like that and fix stuff”.

Jo had the opportunity to work in domestic, industrial and commercial through her GTO. She described her first position, working with a host employer in the domestic sector, as a great experience. “I learnt a lot from him, especially about running a business”.

Fast-forward 5 years on, Jo became an A-grade electrician. She moved into working for a petrochemical company in Laverton, moved to France performing electrical work on chalets at ski resorts so she could be close to her brother. Jo then set her sights on England and moved there to work without finding a position beforehand. “I called around for jobs. People would hang up…when they heard my voice. They weren’t ready for women electricians” she reflected. Jo sat her British electrical license to ensure she could work “even though all the male Australian sparkies I worked with (in England) never needed to show their licenses”. She was then provided with an opportunity to work for 12 months in Canada – which she took on with open arms – and worked in chalet maintenance during the ski season, and hotel maintenance during the summer months.

Jo’s first job was working in hazardous areas for Mobil for a few years, leading to FIFO work in Karratha, WA, where she ended up in a hazardous area inspector position. “The money was good, but a 4 weeks on and 8 days off roster made me miss my family and friends” she commented. This led to a discussion with her partner, and her decision to find another job in Melbourne.

Jo found work in Melbourne on the East Link Tunnel Project. During the project, she became pregnant with her first child. “When I told the shop steward I was pregnant, he said that he’d never dealt with a pregnancy before”. The EBA didn’t have a clause for pregnant women, and the company decided to take her off the tools for six months and move her behind a desk in an administrative role.

When Jo was pregnant with her second child, she decided to start her own business as she didn’t want to stay at home full time. Working on the tools kept Jo busy and content, but Jo reflects “working while pregnant made some people feel uncomfortable. I’d knock on their door, and they were surprised, commenting “but you’re pregnant!” “.

Jo moved on from her business to working as a trainer at 370 degrees (now NECA Education and Careers). “It was an eye-opener” Jo commented, noting that she was hired with no training experience and little to no guidance. She felt like the situation was a sink-or-swim moment, but felt teaching the next generation of the electrical industry a rewarding experience.

Jo decided to move back to the tools, becoming an electrical fitter on the High Capacity Metro Trains Project in Melbourne. She enjoyed the experience, particularly mentoring 20 apprentices working within her team. She also had the privilege to work on the Marvel Stadium. 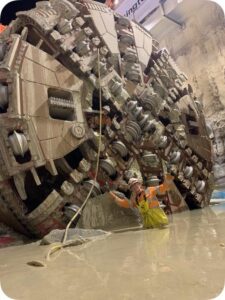 Working in a Male-Dominated Trade

Jo admits to feeling overwhelmed by consistently being surrounded by men. At times, she questioned herself as to what she was doing there, but once she got past these feelings she started to enjoy herself. Jo commented that the men she worked with didn’t make her feel intimidated, but felt uncomfortable around her at first. “At first they didn’t want to talk to me…they’d swear and apologise to me afterwards”. She comments that they were genuine, nice people, and once they got past initial feelings of discomfort were enjoyable to work with.

What Jo loves most about the Electrical Industry

“It’s good fun!” she commented. She enjoys the teamwork and the environment – joking around with her team mates, having a laugh, down to getting to listen to her favourite songs on the radio. For Jo, working as an electrician allows her to be herself, speak her mind, and get paid for what she loves to do. She also loves the diversity the industry can offer, and the career opportunities she has had throughout her journey.

Go out of your way and support other women working with you on site. I remember working on Marvel Stadium, with 120 electricians and only one other female A-grade electrician.

Network with like-minded tradeswomen so you can get support from someone that truly understands – network groups like Sparkettes Victoria, NECA and Tradeswomen Australia.

Through my experience and gaining a mature view on life, I learnt that if you see when something’s not right, call it out and don’t tolerate too much. As a young woman in the industry, I used to turn a blind eye to a lot of things so I could fit it.

Surprise people, and show them that you can do what some men can’t do. Some people in the industry still think women are incapable because of our height, that we don’t have the muscle – you don’t need to be tall or muscular to do the work – sometimes it’s an advantage to be smaller so you can squeeze into tight spaces.

Stick it out. The second year in your apprenticeship can feel the hardest – make sure you hang in there knowing that things will get better. Don’t give up, and don’t get too behind in your schooling schedule.

We thank Jo for sharing her amazing career journey with us, as well as NECA’s Akeera Dharmapala for quote excerpts.